You've heard about Coco, the Disney character newly diagnosed with Type I, right?

Stephanie over at My Life as a Pancreas is giving away five copies of the new book.

Quick!  Go enter now-- entries are due by midnight on Sunday, July 31st!

Do I seem familiar? :) This blog is new, but I've been around the DOC for a while, and I've been blogging about other topics for years. I'm AmyMCGS pretty much everywhere online- CWD, Twitter, etc.
Posted by Amy at 12:04 PM 3 comments:

If I'm going to have a blog dedicated to diabetes, I can't do it without posting my all-time favorite Type I video, The Type I Mom Song:

Do I seem familiar? :) This blog is new, but I've been around the DOC for a while, and I've been blogging about other topics for years. I'm AmyMCGS pretty much everywhere online- CWD, Twitter, etc.
Posted by Amy at 11:37 AM No comments:

When the Sticky Stuff Won't Stick

Something else to add to the list of things nobody tells you about diabetes: heat and humidity are a  major problem when you're trying to keep medical gear attached to your child. Rosie accidentally ripped out both her pump site and her CGM site yesterday because the sticky patches simply aren't sticking.

This is the first summer she's had both (started pump in October '10, CGM in May '11), so we were a little surprised when things started sliding around and not sticking.  This wasn't a problem in cooler weather. We use clear IV patches over her actual pump site, and those hold up pretty well, but her pump connector site (on Sure T sets) and her CGM are just about falling off after a day or two.

We currently use IV Prep, but that isn't working.  We had a sample of Skin Tac that we tried when we first got her CGM, and that seemed to help, but that was only a sample.  (Maybe the CGM people can supply more of that? Note to self: call CGM people when you get off the computer.)  Various medical tapes and bandages haven't worked, either.

I'd love to hear how you get things to stick in this hot weather!

Do I seem familiar? :) This blog is new, but I've been around the DOC for a while, and I've been blogging about other topics for years. I'm AmyMCGS pretty much everywhere online- CWD, Twitter, etc.
Posted by Amy at 8:47 AM 1 comment:

A Little 2-carb Popsicle to Soothe our Nerves...

Well.   The last 36 hours have been... interesting, to say the least.   We made it through the pizza party (and surprise cupcakes) ok- she was high afterwards, but a correction bolus brought her right back down.

That's not the interesting part-- the interesting part is that about an hour after the pizza party, our house was struck by lightening and it blew out many of our electronic items.  Craaaazy.   The power was out an hour or so,  no people were injured, and none of our diabetes gear was affected, thankfully-- but still... crazy.   (Click HERE if you'd like to read the whole story, posted on my other blog.)
We've spent today trying to fix things and figure out a plan for replacing numerous household items.  By supper time we were all pretty frazzled.... and more than happy to partake in one of these new-to-us 2-carb beauties: 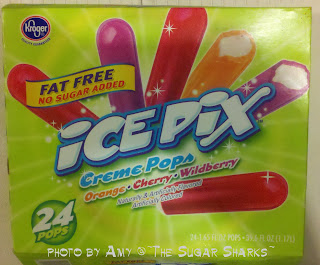 Disclaimer: Nobody is paying me to say anything about these...
I was just particularly happy to have them in my freezer tonight!
Isn't it funny how a simple frozen treat can greatly improve your mood? :)

Do I seem familiar? :)  This blog is new, but I've been around the DOC for a while, and I've been blogging about other topics  for years. I'm AmyMCGS pretty much everywhere online- CWD, Twitter, etc.
Posted by Amy at 9:45 PM 1 comment:

Email ThisBlogThis!Share to TwitterShare to FacebookShare to Pinterest
Labels: food

Algebra in high school was like a foreign language to me.  A code that I simply couldn't crack, no matter how many times my mom and patient friends tried to help me through it.  I swore they plucked those numbers out of thin air, with no rhyme or reason.  Fast forward a few years, and I found myself doing a whole new form of "algebra" each day as I calculate Rosie's insulin doses.  At least d-algebra has a few factors that make sense to me.


Rosie and I have both been sick this weekend- some kind of sore throat/ sinus-y thing.  Her numbers have been high.... cruising in between 250 and 350 for about two days despite all the normal tricks (temp basals, site change, etc.) to bring them down.  Sick days- you know the drill.
Last night, she was feeling better.  Her blood sugar around midnight was down to 141, and I was thrilled.  She spiked back up around 204 later, but still, much better than she had been.  Our experience has been that the highs usually hang around a little longer than the symptoms when ill.
Based on that, and that fact that she feels "fine", we'll be joining her softball team at the local pizza place for their end-of-season party today.   Here's where it gets tricky:
So... set a higher temp basal before the party?  If she goes low, it will be easy to fix, with pizza and candy in abundance there.  But... if she goes low enough to feel bad, it will spoil the party for her.  Leave her at her normal rates and correct the highs later?  Over-bolus on the carbs a little and hope that balances things out?
THIS is the kind of algebra problem they simply don't teach you in school!

...dedicated to our life with Type I Diabetes?  It's an idea I've toyed around with for quite a while now.  I have a lot to say about diabetes, of course, but it hasn't always felt like that content belonged on my main blog, Tiny Blessings, tucked in between posts about coupon deals and Bible readings.  So, I talked to my husband and daughter, and they supported the idea of starting a blog specifically about this "diabetes world " that we live in.  And... here we are!

September 19, 2008.  Like most d-parents, that day is forever burned into my memory.   I'd made Rosie an appointment at the pediatrician's office, because over the last few weeks we'd noticed that something wasn't quite right.  She'd been losing weight.  She'd been refilling her water bottle constantly throughout the day, every day, and gulping it down.  And the last couple of nights she had had accidents in bed.  We knew something was wrong.  I even briefly thought of diabetes, but quickly put it out of my mind, because my experience was with Type II, and,  after all, my five year-old was thin and ate well.  (Yeah.  I had heard of Type I but did not know the differences at that time.)   I told our pediatrician that I was hoping this was something simple, like a bladder infection.
Rosie and I got to the pediatrician's and I described her symptoms.  They took a urine sample, and within minutes our beloved pediatrician came back in with a very serious look on her face.  She explained to me that they couldn't even measure the amount of sugar in Rosie's urine, because it was so high.  She hugged me and told me that Rosie had diabetes.  She said to wait just a minute while she called the hospital, because Rosie needed to be admitted right away.  She called them and I heard her talking to someone there, telling them in a surprised tone that Rosie was sitting up and talking- apparently with her numbers, they expected her to be unconscious.   (We would later learn that Rosie was, indeed, experiencing ketoacidosis and she was treated for it in the hospital.)  She made the arrangements and instructed me to get Rosie there as soon as possible.   I told her I'd need to make arrangements for Rosie's little brother, and she gently stressed to me the importance of getting to the hospital as quickly as possible.  That scared me.
I more or less held it together until I reached the parking lot.  I dialed my cell to call my husband and completely broke down crying, trying to explain things to him between sobs.  Next I called my parents- crying again- and made arrangements to drop off Rosie's little brother at their house.
Our hospital stay was much like everyone else's when diagnosed: three days of trying to cram in as much knowledge as possible of this rotten disease. Constant prodding, poking, and monitoring.  Feeling like the whole world was spinning out of control.
Rosie did fine with the doctors and nurses, except when it came time to do her injections.  Those, she fought with every ounce of her tiny being. Once she literally knocked me to the floor as she fought against me attempting to do an injection... I remember being shocked at her strength, and then even more worried about how I would ever handle this alone at home.
We were scared to go home, away from the safety net of the hospital.  I remember DH and I leaving the kids with my parents and going grocery shopping one of those first few nights home, reading the packages of everything we could get our hands on-- we must have spent two hours in the store that night, trying to figure out this strange new world of carb counting.  Knowing only that "15 carbs" was the magic number for snacks, we bought anything we found that fit that number... in those very early days, we relied heavily on prepackaged items!
So, that's our story.  I don't think I've ever written it out before, and just doing so today has me crying again.  (Truthfully, I can't tell this story or the story of our premature births- both kids- without crying!)  Luckily, I know how the story ends... with a healthy, happy child.  Some adjustments in life, some extra obstacles, some really hard days, but in the end, we're doing just fine.